Loved the first one, played the demo of the 2nd - looks freakin awsum and SCARY.

US, February 10, 2009 - Thanks to horror movies, there are things that we know not to do if we’re ever plunged into a high-stakes paranormal situation. Basic things, like don’t split up, don’t panic, and never, ever think that the little girl you encounter is harmless. That last bit of advice is especially salient in F.E.A.R. 2: Project Origin as, Alma, the unstoppable dealer of psychic death, is back.

When Monolith created the first F.E.A.R. in 2005 it delivered a slick blend of kinetic, John Woo-style gunfights along with horror movies, the most obvious example being The Ring. You played as the unnamed protagonist of a military team caught up in a rapidly escalating situation centered on a rogue commander, an army of clone soldiers, and Alma. The game raced to an explosive finale with a shock ending. But if you were expecting a continuation of that story in F.E.A.R. 2, you’ll have to look elsewhere. 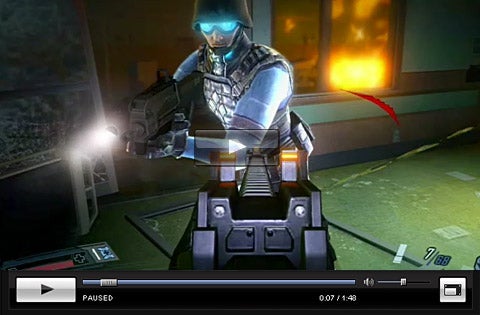 The sequel picks up shortly before F.E.A.R. ends and offers a different point of view, as you play as the member of another military squad tasked with what seems to be a routine job: take a corporate executive into custody. This time around, your character has a name (Michael Becket) but the situation unfolds along the same lines. Before you know it, events rapidly escalate and you’re battling an army of mysterious foes. But that’s when things start to get weird. You have strange visions of a swing beneath a tree, you see ghostly figures at the corners of your vision, and people have a weird way of melting around you.

Thankfully, many of the questions that crop up do get answered this time around, to the point where a lengthy tram ride is spent literally spelling things out if you didn’t bother collecting all the optional pieces of intelligence laying around the levels of the campaign. The storytellers have crafted an appealing narrative, building on the mythology established in the first game but throwing a curve or two into the standard save-the-world plot, and creating an ending that’s as cryptic as it is interesting. 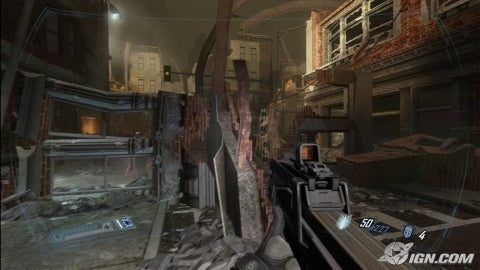 If the story has a weakness, it’s that its first half pales in comparison to the second. Too much time is spent working your way through a hospital in the early goings, and it’s reminiscent of stumbling around the office levels of the first game. Things do get much better in the second half, though, as you battle your way through a burning husk of a city and see some jaw-dropping sites, including a huge testament to Alma’s power as well as a vast underground facility that may remind you of Half-Life’s Black Mesa.

The gunplay alternates between frenzied chaos and slow ballets. The difference is in your character’s superfast reflexes, which can be kicked in for short bursts to provide a sense of Matrix-like bullet time. Once you get used to it and the controls, it changes the game, as you can ration it so that most battles can be handled in slow motion. You might argue it makes the game too easy. That’s no problem, then, because if you choose not to use it then the gunfights feel like they’re in hyper motion. The AI soldiers shift quickly and with purpose, always moving, looking for cover, and even knocking objects over to create hiding spots.

You too can manipulate the environment to create cover, but this mechanic feels like a gimmick, since there’s no effective way of hugging that cover, a la Gears of War, to any effect. The time it takes to flip a table over could be more efficiently spent just killing enemies. Damage itself is rarely an issue since there are health packs and boosters, as well as armor, in plentiful amounts. There’s also a decent sense of chaos in firefights, though it doesn’t feel as pronounced as it did in the first game.
Then there are the horror elements of the game. To its credit, F.E.A.R. 2 is genuinely creepy at times. Yet some of the horror devices aren’t as effective as they used to be, partly because they’re familiar. For instance, the first time Alma suddenly appeared in front of me in F.E.A.R. made me jump, but now it’s almost expected.

Another reason is that there have been games in the intervening years, like S.T.A.L.K.E.R: Shadow of Chernobyl, that have done creepy atmosphere even better. With that said, F.E.A.R. 2 did get under my skin at times, especially when dealing with the enemies called specimens, which are a lightning fast, wall-crawling foes that tap directly into your fear of things with more than two legs. There are also some outstanding special effects for the spectral enemies, as their ghostly apparitions stand out in the dark.

Monolith does a good job of switching up the pace. The first game suffered from repetitiveness; it was basically a nonstop gun battle against identical clones. F.E.A.R. 2 intersperses the gun battles with a couple of satisfying vehicle sequences where you get to unleash your frustration by clown-stomping the enemy while clad in power armor. It’s fun to chew up concrete pillars with gunfire and watch your enemies explode in fountains of blood. Then there are a couple of turret sequences where you can pound back waves of enemies. 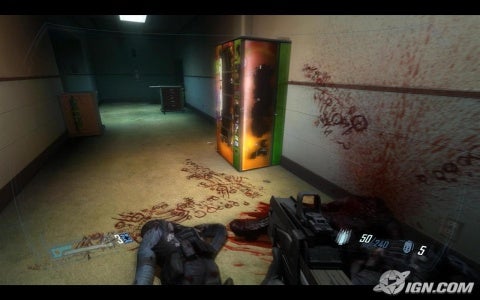 There are more types of foes as well. The clones are still around, as well as those high-tech ninjas from before. But now there are mercenaries and a broader range of paranormal baddies. My favorite is the remnant, which is a puppet master that animates corpses to battle you. Unfortunately, there are only a few remnants in the game, and the final one is by far the best of them, as you engage in a cat-and-mouse boss battle throughout a school. The previous remnant battles are relatively easy in comparison, which seems like a wasted opportunity.

The multiplayer suite sticks with the basics, which makes it hard to distinguish from other shooters. There are basic modes such as deathmatch and capture point mode, as well a 16-player Armored Front mode that features two suits of power armor. However, it feels like it’s missing features and options from the first game, such as the bullet-time pick up that became the focal point of battles. The multiplayer feels well balanced and capable of providing competitive matches, but it’s not as full-featured or as expansive as multiplayer found in other games, which will impact its ability to draw and sustain a community of players. 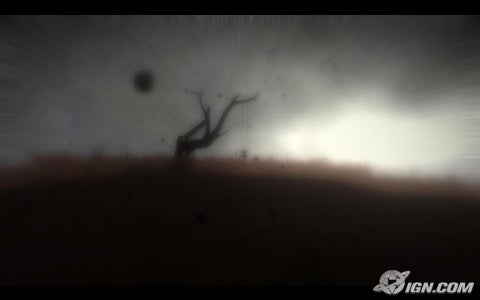 A tree grows in your nightmares.

I played the game through on the console, and it’s a wash between the PS3 and Xbox 360 in terms of visual quality. It’s a detailed game, though the graphics seem a bit workmanlike. As I noted earlier, though, there are some outstanding lighting and special effects going on. However, what struck me was just how much better the game looked on the PC. It’s not just the usual PC things, such as the sharper visuals and higher resolutions, but it also looked a lot cleaner and felt a lot more fluid, and that had a big impact on the atmosphere. This is a game that’s built around the idea of trying to make you feel like you’re seeing something in the corner of your eye, whether it’s a bookcase rattling or a shadowy figure quickly going out of view. When I played the PC version, I caught so many more of these events than I had on the console version, partly because the PC version looks so much cleaner.

The audio is pretty good, from the sound effects to the music, which has a nice discordant theme that fits in pretty well with the sense of chaos building within the game. If you can, play the game with headphones or a good speaker system (and make sure to turn off the lights) because the sound really helps cement the atmosphere. The voice work itself is professional and familiar; you’ll likely recognize a voice or two from other games.

Closing Comments
With F.E.A.R. 2, Monolith has crafted a solid follow-up to F.E.A.R. It’s a good shooter, bordering on great at times, but it’s not as groundbreaking as its predecessor. Still, it’s definitely faithful to the idea of F.E.A.R., which is mainly trying to get under your skin using a combination of tried-and-true horror elements, not the least of which is a creepy little girl.

loved this game, will give it another play through soon. Indeed very little is different from the first aside from sexed up graphics and disintegrating people with your armoured power suit of doom. But I loved the first one, so that frankly didn’t bother me one bit!

My only issues is the very very ending semi freaked me out (not in the scary way, more the eeeeeeeewwwwwwwwwwwww way), and NO ONE PLAYS MULTIPLAYER! Played soooo much FEAR Combat, and just last satdy I went to havea game, got no servers with a ping below 400 :bored:

This is the only game that has ever scared me.

Sitting in a dark room by yourself and that little bitch appears…friggen tingles down my spine.

lmao. I used to deliberately play at like 2am in the morning…headphones on…lights off…freakin AWESOME.

Sif you would play it lights on anyway, would hardly be able to see a ****ing thing.

FEAR 2 multiplayer was an absolute disaster. With no dedicated servers, took little less than a month for it to be almost completely abandoned. I still take a look every now and then, it’s never better.

There was another big reason IMO, but maybe this will help!!!

The most awesome thing about Fear combat multi was the slow mo deathmatch. WTF were they thinking no having it in the sequel?!?!

might be worth looking into as it was way to short, needed another 4 missions