I’d be willing to give it a shot.

Despite the Sony sponsored logos, its available on PC, XBONE, and PS4.

Its looking good so far.

From You wanted a Star Wars™ Battlefront™ Beta? As You Wish.

Coming early October to PlayStation 4, Xbox One, and on Origin for PC, the Star Wars Battlefront Beta* is a technical test and will feature Walker Assault on Hoth, a 40-player multiplayer battle featuring Rebels and the Empire. Walker Assault will also give you the chance to play as two of the most iconic characters in the Star Wars™ universe: Darth Vader and Luke Skywalker. The Beta will also feature our Survival Mission on Tatooine, where you and a Rebel friend must fight back waves of Imperial forces.

In addition to those two modes, we are excited to reveal a brand-new mode that will be available in the Beta, Drop Zone. We’ll be sharing more details on Drop Zone in the weeks ahead.

Just as things were looking good, the caveats roll in…

Star Wars Battlefront will not offer a server browser, but will utilize a new skill based matchmaking system.

Fight for Pod Control in the Action-Filled Drop Zone Mode

Similar to “King of the Hill”-style experiences, the objective in Drop Zone centers on drop pods falling through the atmosphere onto the planet surfaces. In tight 8-versus-8 matches, Rebel and Empire teams fight to capture and control these pods. 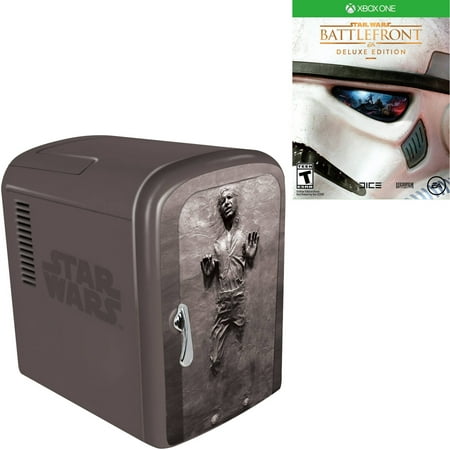 [The Beta] will be open to everyone

And the beta includes…

Everett said that the beta will feature both offline and online modes, including split-screen co-op play, with the Walker Assault mode on Hoth and the new Drop Zone mode, as at least one of you hoped, on Sullust. There will also be a Survival Mission mode set on Tattoine that can be played solo, or with a local or online partner.

No dates have been announced.

The star Wars™ Battlefront™ Beta will be available for PlayStation®4, Xbox One and on PC via Origin players between October 8 and October 12. [snip] The game launches on November 17.

With the following modes:

Walker Assault on Hoth: Fight in epic 40-player battles as a Rebel to destroy the Empire’s onslaught of AT-AT’s by calling in Y-wing bombers. Or, side with the Empire and protect your walkers while utilizing their mighty weaponry to crush the Rebel objective.

Drop Zone on Sullust: Escape pods are crashing down and you and your team must fight to control them. With its frantic 8v8 matches, Drop Zone is sure to put your combat and strategy skills to the test.

Survival Mission on Tatooine: Play alone or with a friend via co-op or split-screen as you battle to hold off waves of Imperial forces including AT-ST’s, TIE fighters, elite stormtroopers and more.

How do get into the beta?

The Star Wars Battlefront Beta is open to PlayStation 4, Xbox One and Origin for PC players. There is no need to register.

JB Hifi has Battlefront for $68 for XBOne, PS4, and PC

Delivery is $0.99 if you want it through the website. 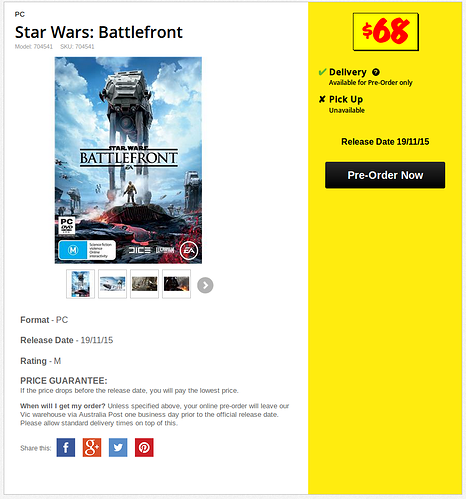